PhotoVoltaic-Thermal (PVT) collectors combine photovoltaic and thermal conversion of the solar irradiation in a single device (for extensive reviews and entry points to the literature see e.g. Refs. [1] and [2]). Like pure thermal solar collectors, PVT collectors can be categorized in covered and uncovered types. Uncovered PVT-collectors resemble standard PV modules equipped with a heat exchanger on their rear side. This type of collector largely dominates the PVT market [3]. It is, however, suitable only for low-temperature applications like borehole regeneration or domestic hot water pre-heating. Covered PVT collectors are equipped with an additional transparent or translucent top layer that reduces convective thermal losses. They can efficiently provide heat at temperature levels typical for solar thermal flat plate collectors and hence be used in similar applications, like e.g. domestic hot water preparation and space heating.

The design of covered PVT collectors is much more challenging compared to uncovered collectors, which usually are simple extensions of standard PV modules. The main difficulty is related to the higher temperature levels and changes reigning in a covered collector, which impose considerably stronger requirements on the materials used. Further, aspects like optical efficiency and thermal absorber efficiency have to be optimised specifically for the case of combined heat and electricity production. The very few existing products do not present satisfactory solutions to these issues.

The design concept envisaged is illustrated in Figure 1. Bifacial BiSoN PV cells are glued directly onto a “Glasolo” absorber, which acts as the heat-carrier element (see Ref. [4]). The “Glasolo” absorber consists of two parallel glass sheets mounted together with a distance of about 1 mm. A heat transfer fluid is circulated through this 1 mm slit. Thus, the “Glasolo” absorber is a so called “fully wetted absorber”. As the thermal expansion coefficient of the glass used is very close to the one of the PV cells, and since the glass is a very good electrical insulator, the glue layer between cells and glass can be extremely thin, which saves costs and reduces the heat resistance between the cells, where most of the heat is generated, and the heat carrier liquid. Additionally, the NIR irradiation that cannot be converted into electrical power and is transmitted through the bifacial cells can be absorbed by the heat carrier liquid itself, which will additionally increase the overall efficiency. A glass cover will be placed with a distance of about 1 cm above the cells, forming an insulating air-gap. The air-gap will be sealed technology known from the manufacturing of insulating glass units (IGU).

The aim of the present project is to analyse the feasibility of the new concept. Materials for the different collector components are selected and characterized. A functional prototype of the covered PVT collector is built, and its electrical and thermal performance is measured. 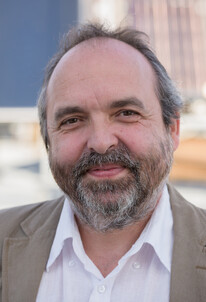