In the production process of Belimo Automation AG, housing lids were previously fed exclusively by hand from the delivery box to a printing station for labelling. Because this is a repetitive and resource-intensive step of the procedure, Belimo was facing the question: Could the handling of the housing covers be taken over by a collaborative robot?

Up to now, the printing of housing lids in the production process at Belimo required an employee to manually grab the housing lids in the delivery box, place them on the printing station and finally set them down in another box for further processing. The work step is repetitive and resource intensive. Belimo therefore commissioned the ILT Institute for Lab Automation and Mechatronics to clarify whether a collaborative robot could substitute this step of procedure.

From the robotics point of view, this is at first glance a standard Pick'n Place application involving an image processing system. However, the tight space conditions in the boxes as well as the fact that the housing covers are delivered loose and sometimes lie disarranged in already opened boxes, give the task a high degree of complexity.

In a first step, the suitability of the application for the use of a collaborative robot system was assessed. The focus was on criteria relevant to the process, such as the required movement sequences of the robot arm, as well as process and safety aspects. Furthermore, the necessary interactions between robot and operator were identified and assessed. Since part printing is an offline process step and an operator intervention in the process therefore does not lead to delays in the production chain, the use of a collaborative robot is also beneficial.

During the design phase, questions regarding the concrete structure of the system were clarified, such as which collaborative robot is suitable for the application and also offers a good price/performance ratio, as well as which camera system meets the requirements for detecting the different colored housing types. The advantages and disadvantages of the different systems were weighed against each other and the concept decision for the implementation was made using UR5e from Universal Robots and an InSight 7905M vision system from Cognex.

During the subsequent implementation, the challenges of complex CoBot applications and the resulting increased demands on programming became apparent. For example, a large part of the robot programming had to be implemented in the extended script functions, as the required functionality could not be completely covered by the standard programming. Due to the limitations of the robot kinematics, a seventh axis also had to be implemented on the gripper periphery to ensure rapid reorientation for inserting the housing parts for printing.

For the interaction between robot and operator, additional cobot-specific features, such as a sensitive level detection through sensing the boxes, were implemented in the program sequence. Furthermore, the first printed case lid of a new print job is presented to the operator for checking. If the print result is satisfactory, the CoBot can be requested to place the housing lid into the output box by slightly pushing it sideways on the gripper periphery. If the print result is insufficient, the housing cover can be manually removed from the gripper and the process starts again. In order to increase user-friendliness, the standard operating elements on the UR panel have also been extended with an additional customer-specific user interface based on UR-Caps.  The system is now in productive 3-shift operation and supports people in repetitive tasks.

"Although the cycle times are longer compared to humans, we are still very satisfied with the result", says Beat Kirchhofer, Head of Production Engineering at BELIMO Automation AG. "The CoBot works continuously and only needs to be supplied with material from time to time. Through the project with the ILT, we have gained an impression of the application cases in which CoBots can be suitable. Ideas for further applications can now be evaluated more easily on the basis of experience. The cooperation with the ILT was successful because the already existing experience of the ILT team could be incorporated into the project and because we were able to establish a very uncomplicated and lean way of working together". 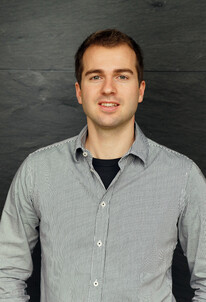